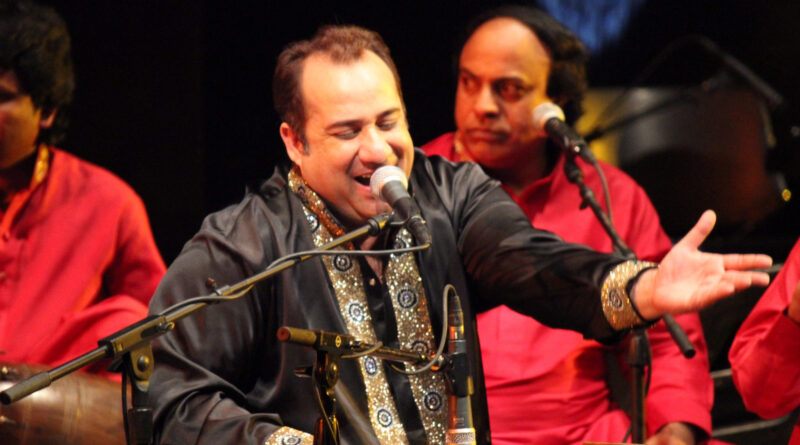 Besides Qawwali, Rahat also performs ghazals and other light music. He is also famous as a playback singer in Bollywood and the Pakistan film industry.

He was born into a Punjabi family of Qawwals and classical singers.

Rahat showed adoration for music from quite a young age, and he loved singing with his father and uncle. When he was only 7, he was already being trained by his uncle Nusrat Fateh Ali Khan.

His first public performance was when he was only nine, at the death anniversary of his grandfather.

When Rahat was fifteen, he was a crucial part of Nusrat Fateh Ali Khan’s famous qawwali group, and he even toured the UK with his uncle in 1985.

He debuted as the playback singer in Bollywood in the movie Paap (2003), and the song was “Mann Ki Laga.”

In 2012, he toured in the UK, performed at Wembley Arena and also the Manchester Arena, in front of over 20,000 people. He also created a record of maximum ticket-sales.

The song “Zaroori Tha” from the album Back 2 Love (2014) was the first original non-film music video from the Indian subcontinent that crossed 100 million views after only two years, and 200 million views within three years of the release. He is also regularly touring with Leo Twins.

He appeared in four seasons of the famous Pakistani musical show Coke Studio.

In season one, he collaborated with the singer Ali Azmat for the track “Garaj Baras.” Then he worked with Abida Parveen in season 6 for “Chhaap Tilak Sab Chheeni.”

In the 9th season, he sang “Afreen Afreen” with Momina Mustehsan, which has gained over 300 million views on YouTube.

Rahat was the first Pakistani who performed at the Nobel Prize concert in 2014.

Rahat judged the show, Chhote Ustaad, alongside Sonu Nigam. Besides, he was one of the judges on the singing reality show Junoon, in 2008.

In 2018, the daughter of Nusrat Fateh Ali Khan said she wanted to take legal action against singers who sing her father’s songs. To that, Rahat said he does not need anyone’s permission to sing his songs.

In January 2019, Rahat was accused of smuggling foreign currency.

In 2002, he worked on the soundtrack of The Four Feathers with the American composer, James Horner.

Also, in 2002, Khan guested with The Derek Trucks Band on the song “Maki Madni” for Trucks’ album, Joyful Noise.

In the year 2006, his vocals were featured on the soundtrack of Mel Gibson’s Apocalypto.

This singer’s estimated net worth is around $1.5 million.